4 For The Hell Of It Stars 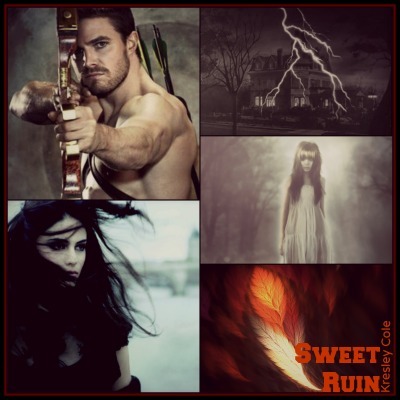 Its done. My yearly fix of IAD is already fading and I cant quite tell if I was satisfied with my dose or not. I was waiting for this a long time and maybe my expectations were higher that they should have been. Not that the book was bad or anything, just... I need subcategories to explain! Here they come...

Its a PNR book so the romance played a big part in the book. I was semi-satisfied with the romance. Jo was great. Strong, stubborn, protective and sly. I liked her street smarts and her survivor instict. I also liked how, for once, the girl actually accepted that she was in love and keeping the guy fairly easily, without the angst and turmoil, on the other hand though, Rune wasnt worth it. And here comes the problem, I didnt like Rune. He was a first class ASSHOLE! He had all the right elements for a PNR hero, tall, dark, dangerous, protective, alpha, commitmentphobe,... The usual. But I hated how he couldnt see how he hurt Jo, how he dismissed her as hysterical and by the time he got his shit together it was already too late in my book.

And it is. It always is with IAD, especially when Nix is involved. I loved seeing the other side. I enjoyed getting to know the Morrior a little bit and seeing that though they might be the opposition(are they really gonna be??), they are not evil. They have good intentions at the very least. Although I still havent made up my mind about Orion. Still, the story was interesting. I loved how Rune and Jo chaced after Nix and the new revelations. Still, the book felt like a filler. A way for KC to build the world and lay the groundwork for the books to come. Fillers are needed in a series but waiting 1.5 year for one makes you a bit frustrated. I think KC should consider writing a few novellas in between to cover some ground. Still, the story wasnt boring or anything so...

Well, Nix definitely has! She is a basketcase and she still can stategise with the best of them. I love watching while she plays with other peoples lives like chess pieces. Im dying for her POV! Even a small look into her head is going to be awesome. I just hope that when it comes the author will be able to actually deliver. Apart from our beloved prophetess there were plenty of new characters and almost none of the old. Meeting the Morrior was the most interesting aspect of the book by far and I have a theory that (view spoiler)[Blace-the primorial vamp guy- is Jos and Thads father (hide spoiler)]. But well have to wait and see on that one. I hope we get books on many of the new players, I just want these new guys to match up with a few of the old ones. This series cant go on forever... Can it? Nix with Darach? Now that will be a match for the madhouse! There was also a bit of built up for Thads book, with Natalie probably. But since Thad is still a kid, were probably gonna wait on that one for a while.

It wasnt what I got but I dont know whether to be happy or sad about that. What I do know is that I hope KC speeds her writing up a bit and deivers a few of the much promised books. Furie, Kristoff, Cata, Munro, some of the Dacians and now Darach, the Demon Lord guy(that for the life of me I cant remember his name right now), Blace. I cant deal with even more new characters.

At least give us a BLURB!!!

Is it just me or is the title and the cover really that weird? I just saw this here today and it honestly doesnt fit with the rest of the series...

Well, they do say be careful what you wish for. I got my wish for a BLURB and Im not excited at all right now. Why new characters? There are literally more than a dozen already introduced that could have gotten a book. Is this going to be the next Dark-Hunter? Will the characters never stop coming until we stop remembering who the hell is who, or even worse, stop caring? I do still plan to read the book and be optimistic about it because I just cant help myself but if the next one is about some newcomer too or some irrelevant character that no one cares about, Im not gonna be a happy reader!

IAD news! Eight Fast facts about Sweet Ruin (coming 12-1-2015)!
1. This story will push the Accession forward in a major way
2. This is the 2nd longest book in the IAD series
3. I chose to release this story before others because I’m setting up future conflicts (it needed to come before Munro’s, Furie’s, Cara’s, and Thad’s)
4. AND because I wanted to introduce Orion, a male who will play a huge role in Nïx’s future
5. AND because I wanted to introduce Darach Lyka, the 1st Lykae and the alpha of his species. (Remember the guy from the Living Book of Lore, the human male who was bitten and rose from the dead as a Lykae? We’ll meet him in Sweet Ruin!)
6. You’ll see Thaddeus as an adorable little kid (his favorite word is fuggoff)
7. You’ll travel to new realms. Ruin’s weekender is on Tortua, a pleasure plane, and has a glass floor to view the story beneath it. Ahem
8. You’ll meet most of the Møriør, who’ve had to deal with Nïx’s diabolical side (we all know she’s done some shady things to her ALLIES—now you’ll see her in action against her ENEMIES. Not for the faint of heart!)

Kresley Cole is an American 1 New York Times bestselling author of paranormal romance and young adult novels. Kresley Cole is the 1 New York Times bestselling author of the Immortals After Dark paranormal series, the young adult Arcana Chronicles series, the Gamemakers series, and five award-winning historical romances. A master's grad and former athlete, she has traveled over much of the world and draws from those experiences to create her memorable characters and settings. Cole lives in Florida with her family. From Wikipedia, the free encyclopedia.

Protecting her baby brother became her entire life. A lethally sensual enforcer on a mission Archer Rune the Baneblood never fails to eliminate his target. In his sights: the oldest living Valkyrie. A boundless passion that will lead to sweet ruin… Could this exquisite female be a spy sent by the very Valkyrie he hunts? When Jo betrays the identity of the one man she will die to protect, she and Rune become locked in a treacherous battle of wills that pits ultimate loyalty against unbridled lust. Her books have been translated into over twenty foreign languages, garnered three RITA awards, and consistently appear on the bestseller lists in the US and abroad.

Iww songs to fan the flames of discontent

Basic mathematics a teach yourself guide

What is a tentative release date